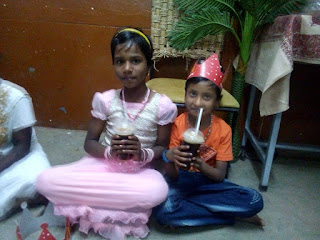 We began collecting money around 8 days ago. After several Facebook posts, two blog entries, God alone knows how many emails and hours spent walking from house to house asking people to donate, we managed to raise over ₹1,00,000. The meals themselves cost us ₹86,500 (McDonald's gave us a 20% discount on the grounds that it was charity), which leaves us with approximately ₹10,000 behind the loose brick. I intend to use the ₹10,000 to buy a Jacuzzi do another set of deliveries after the 16th of January, once my exams are finished.

The project involved over 20 of my friends (and friends' friends) and 15 orphanages. We had at least one person at 14 of the 15 orphanages. We were there in order to help with the delivery and the distribution (and get some pictures for you, O esteemed reader). When I initially spoke to McDonald's, I'd asked for a burger, fries, a bottle of water (because many of the orphanages were against fizzy drinks) and a toy. What they turned up with was the burger and fries, iced tea, toys, colouring books, balloons and paper crowns. For the most part, they were also incredibly punctual. 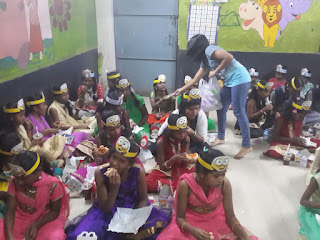 The whole thing began (for me) around 11:00 AM. One of the orphanages, Shishu Mandir, which had said that it had 210 children the previous day, suddenly told me that only 35 of the kids were at the orphanage. That created the problem, for me, of what to do with the other 165 burgers. Several calls later, we decided that I would redistribute some of the burgers to other orphanages and the rest would be sent to Shishu Mandir after the other kids came in. That done, I headed out for Shishu Mandir, which was on pretty much the opposite side of town from where I live. While I was at Shishu Mandir, Mighty Grace and Sneha Orphanage, my friends had gotten to the other 11 orphanages. With lots of phone calls, WhatsApp messages and general frustration, we managed to figure out where the orphanages were and make sure that McDonald's did the deliveries on time. 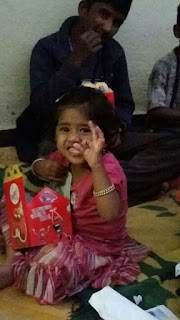 What with one thing and another, with the two orphanages that decided to drop out one day before the deliveries, with the orphanage that suddenly ran short of 165 children, we were still able to make 1085 children smile. Rishi Sudhir, one of the volunteers, and his parents decided that even the staff of the orphanage deserved a treat for New Years Day and spontaneously ordered 20 extra burgers for them. A huge shout out to (alphabetically) Aditya, Aniruddha, Aparajita, Arnav, Dhruv, Gayathri, Impana, Nandan, Satvik, Rishi, Madan, Aryan, Mishica, Dimple, Pranav, Yugayattri, [Satvik's friend]. You guys were awesome. An equally large shout out to our contacts from McDonald's - Mr. Kedar Teny, Mr. Rahul Shetty and Mr. Karuppan Chetty - you guys were awesome too. Thanks so much to everyone who donated and made this whole thing possible, as well. Thank you for helping us create 1K:).

P.S. You can find the rest of the pictures at our Facebook page here.

Popular posts from this blog

The Death of a Joke

August 02, 2016
Here's a tale I find quite amusing: a few years ago, I read a joke about a dog. The dog goes to a store and purchases some goods. The shopkeeper is quite amazed to see this, and he follows the dog to see where it goes. The dog takes the goods and gets on a bus. It goes into the suburbs and walks up to a house. Dropping the bag, the dog starts throwing itself at the door of the house. A man opens the door and starts yelling at the dog. The shopkeeper rushes in and stops the man, asking him why he is yelling at such an intelligent animal. The man responds, "That's the third time this week he's forgotten his keys!" Now, while this may be quite funny in itself, this isn't the whole story. The bit I found really amusing was that a few weeks ago, I received this joke in a text on WhatsApp (that's right, folks, even we teenagers aren't spared the torment of chain WhatsApp messages.). At the end of the joke, one of the many geniuses who mass-produce these mess
4 comments
Read on »

No Good Place To Do Mutra Visarjan In This Country...

July 12, 2015
At least, that's what Chatur Ramalingam seems to think. However, many of our fellow Indians seem to disagree with him. According to them, there are nothing BUT places to do mutra visarjan (for all you poor, masochistic folks - ah, I mean, non-movie-going folks - out there, mutra visarjan means urine expulsion). In case you haven't guessed already, we're going to be talking about one of India's most widely criticized and even more widely practiced issues - public urination. I'm not exactly saying that it's our people's fault - I mean, come on, we have so much urine-related cultural history! Just in the past 50 years, we've had people who've used their urine for everything from watering plants to drinking it (I believe that some people also flush it down their toilets. How wasteful of them). Besides all the historical precedents, however, we also have some more practical reasons for peeing wherever and whenever we feel like. If you've ever seen
15 comments
Read on »

January 09, 2018
As anyone currently in the twelfth will tell you, with varying levels of dismay, the final exams are right around the corner. Parents everywhere are seizing their children's phones and taking time off from work. Panicked screaming ensues at intervals. I don't believe there's a person on the planet who genuinely enjoys exam season. Actually, I take that back - there's no one in India  who enjoys exam season. Partially, I think this is our own fault. Exams are the most important things in an Indian student's life, so parents seem bent on bottling up all the worry and concern they have about their kid's education and allowing it to spew forth in a torrent of "No more video games!" and "Delete WhatsApp!" commands during the two months surrounding the exams. Small wonder, then, that at 17, I believe the purpose of exams is to seasonally blot the sunshine from otherwise happy lives. This whole exam fever thing does have some upsides. Okay,
21 comments
Read on »

Subscribe to RSS Feed (if that's more your style)