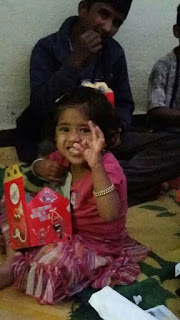 If you've been following my blog for a while - since the end of 2015-beginning of 2016 - you'll probably remember a post I did last year about the Thousand Smiling Faces project (I also wrote another post about it immediately after). For those of you who are too lazy to click through those links, the Thousand Smiling Faces project was a bunch of us teenagers getting McDonald's Happy Meals for 1000 kids in orphanages.

I was planning to this again on New Year's Day 2017, but couldn't get it to work out. However, Independence Day is coming up, and we're going to do it again, but this time, we've gone a little crazy - instead of working with 1000 kids, we're aiming to deliver 5000 meals! That's roughly  ₹5,00,000's worth of Happy Meals, a lot of burgers by anyone's standards.

We've also got another twist to the thing this year. Seeing as we're doing it on the 15th of August, which is India's Independence Day, and seeing as how McDonald's is just a faceless multinational corporation, we're going to ask every orphanage we visit to raise the Indian flag.

5000 meals means that we're going to have around 50 orphanages, so I'm currently working really hard to get some volunteers. There will have to be at least 50 of us if we want to be able to get pictures at all the orphanages, and so far I have a grand total of 6 people - including myself - signed up. The five of us - Impana Halgeri, Anirudh Iyengar, Arnav Poddar,  Jayitha VSS and I - are calling the orphanages and getting this project started. If you're under the age of 18 (Sorry, adult readers) and want to volunteer, you can sign up here.

The other big way in which you can help is by donating to the event. We've set up a page with Milaap.org, the fundraising platform we used last year. Please give generously, because ₹5,00,000 is not a small sum. We will get burgers for the kids using however much money we manage to raise, irrespective of the ₹5,00,000 goal, but it'd still be amazing to feed 5000 kids, even if it's only for one meal.

To use a (slightly modified) cheesy advertising tagline from last year - This Independence Day, let's put a smile on 5000 faces!

Popular posts from this blog

No Good Place To Do Mutra Visarjan In This Country...

July 12, 2015
At least, that's what Chatur Ramalingam seems to think. However, many of our fellow Indians seem to disagree with him. According to them, there are nothing BUT places to do mutra visarjan (for all you poor, masochistic folks - ah, I mean, non-movie-going folks - out there, mutra visarjan means urine expulsion). In case you haven't guessed already, we're going to be talking about one of India's most widely criticized and even more widely practiced issues - public urination. I'm not exactly saying that it's our people's fault - I mean, come on, we have so much urine-related cultural history! Just in the past 50 years, we've had people who've used their urine for everything from watering plants to drinking it (I believe that some people also flush it down their toilets. How wasteful of them). Besides all the historical precedents, however, we also have some more practical reasons for peeing wherever and whenever we feel like. If you've ever seen
15 comments
Read on »

January 09, 2018
As anyone currently in the twelfth will tell you, with varying levels of dismay, the final exams are right around the corner. Parents everywhere are seizing their children's phones and taking time off from work. Panicked screaming ensues at intervals. I don't believe there's a person on the planet who genuinely enjoys exam season. Actually, I take that back - there's no one in India  who enjoys exam season. Partially, I think this is our own fault. Exams are the most important things in an Indian student's life, so parents seem bent on bottling up all the worry and concern they have about their kid's education and allowing it to spew forth in a torrent of "No more video games!" and "Delete WhatsApp!" commands during the two months surrounding the exams. Small wonder, then, that at 17, I believe the purpose of exams is to seasonally blot the sunshine from otherwise happy lives. This whole exam fever thing does have some upsides. Okay,
21 comments
Read on »

July 18, 2017
Note: This post was actually my essay for my English exam this morning. All credit for the topic (How my generation socializes differently from my parents') and the title of this post go to my teacher, Mrs. Shobha K. Millennial introduction: Hello, fellow millennial! How is your suffering? Baby boomer introduction: Greetings, O almighty reader! I know, sounds weird, right? Not least because people don't actually greet each other that way. They never have. It does, however, highlight something that I really want to talk about: that millennials and baby boomers socialize in very different ways. Myself, I'm a millennial. For those of you that don't know, that means that I invest poorly and can't buy property because I spend all my money on avocado toast. At least, that's what the Gen X millionaires would have you believe. A lot of Gen X-ers would also have you believe that Gen Y does not know how to socialize, does not know how to converse. I'd like t
Post a Comment
Read on »

Subscribe to RSS Feed (if that's more your style)